"Life moves pretty fast. If you don't stop and look around once in a while, you could miss it."

*Damn*. Ferris wasn't kidding. Scroll down toward the bottom and look at the pics of wee lil' Ari perched atop other peoples' motorcycles a mere almost-two-decades-ago. Then come back up here. Go ahead, I'll wait.

For Xmas last year, Ari finally moved up to her own first bike, a little Honda Rebel 250 starter that she's dubbed Seymour (counterpart to her new carnivorous-plant themed helmet, Audrey). As I write this on Valentine's Day, yesterday she passed her MSF basic training course, so all that's left is a piddling little DMV written test before she continues the family tradition as a full-fledged biker. She promises to still occasionally take a ride sitting behind me, just to placate the old man, but mostly I couldn't be prouder to have her riding *next* to me. 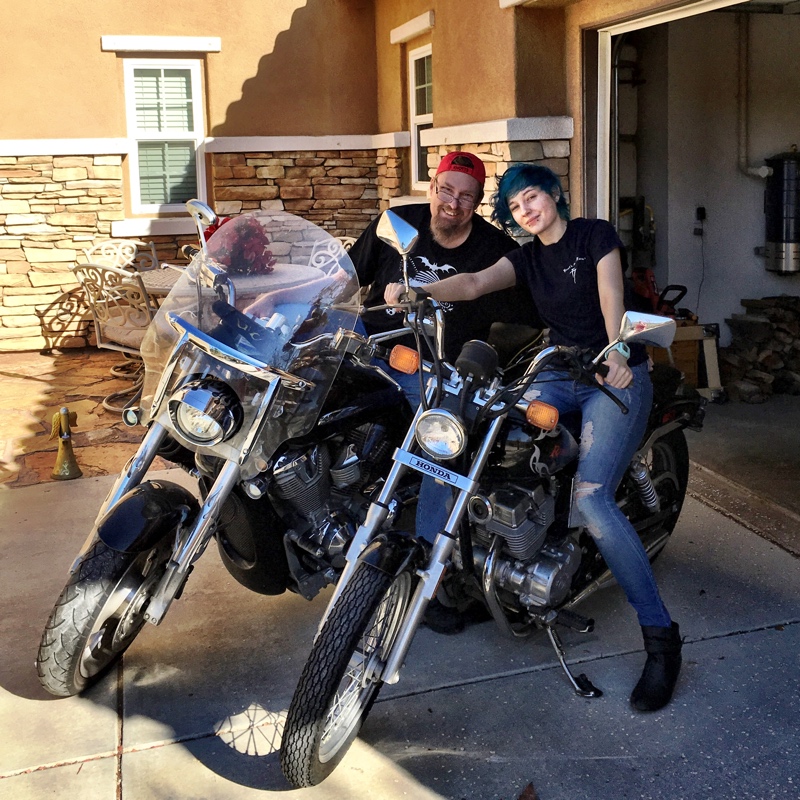 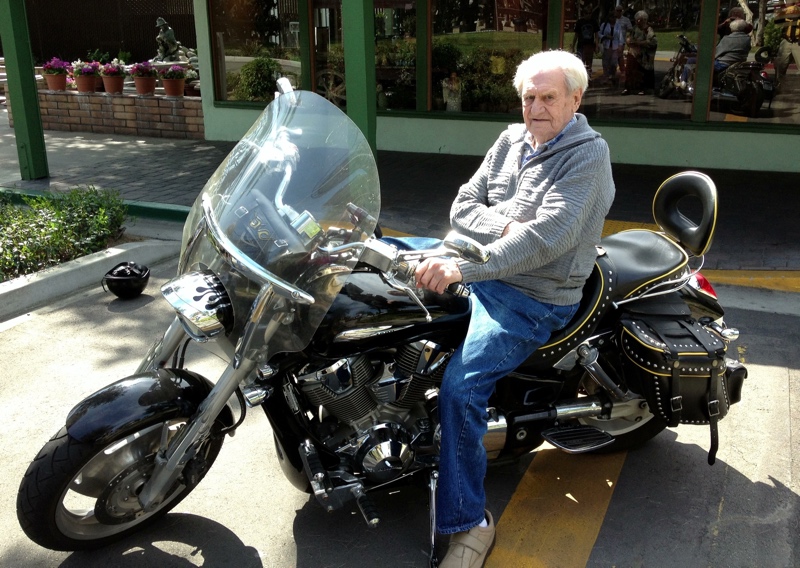 "Motorcycle Grandpa" Spike died last Saturday, a few days short of his 96th birthday. We thought he'd ride forever. Even though it applies to her own Grandpa as well, when Ari says "Motorcycle Grandpa" she's always meant her Great-Grandpa Spike. Most of these are from when we'd stopped somewhere, but he didn't just pose - he *rode* with us (most memorably on a weekend run up to Santa Cruz in 2005, when he was nearly 86). The photos in this album span about 2001 to 2013, when he was 94 and we met up at Knott's. Getting a leg up over the bike was a bit of a process for him at that point, but once he was up on the seat he was as ready to ride as ever. 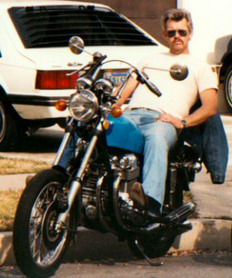 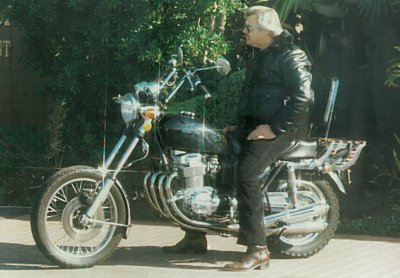 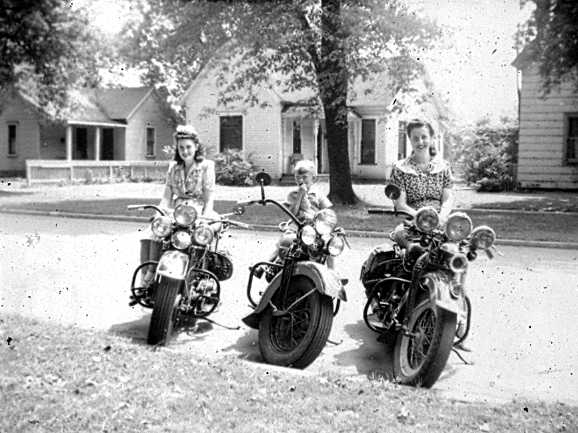 Maybe it started farther down the family tree (I'm told that's my maternal Grandma on the left).

But I lay the blame for my sister and I squarely on Dad.

I don't remember exactly when he brought his first motorcycle home, or even precisely what model it was. But both my sister and I remember very clearly riding behind him on it, especially moonlit night runs down along the coast and over the Vincent Thomas Bridge to Ports o' Call in Long Beach. A chance to ride with Dad was one of the things we enjoyed most, and it made an impression on me that has never faded.

Several years before I owned a functional car (but several years *after* I was legally entitled to do so), I eventually got my own bike, a (very) used 1986 Honda Shadow VT500. I took my then-future wife out on our first date (and most of the following ones) riding that bike. Eventually, it was replaced in March 1997 by my first brand-new motorcycle, a 1997 Honda Shadow Spirit VT1100 in my trademark colors of black and yellow.

The Shadow was a great ride, and a vast improvement over the little VT500 I'd started with, but when when we rented a new Honda 1800 VTX for Dad to ride over the weekend on his annual trip out from Missouri, I absolutely loved it - actually rode it to a dealer and asked how much my Shadow might be worth as a trade before very reluctantly giving the rental back. Spent the next several months reading every magazine review I could get my hands on, and when Aereyal suggested that a VTX might make a good present for our 10th anniversary on Halloween 2001, well... I was very supportive.

Real life and the complexities of finance being what they are, it wasn't until March 2002 that I actually rode home on my very own Honda VTX 1800c. I never felt moved to name any of my previous bikes, but this one spoke. So everyone, meet Czernobog. 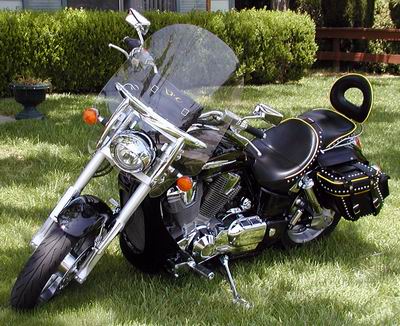 You know, Czernobog - the black night god from pagan Slavic mythology, dark and destructive opposite of his twin Bielebog? Turns up as a character (with several of his relatives) in Neil Gaiman's terrific novel " American Gods"? Maybe you'll recognize this version of him, from the "Night on Bald Mountain" sequence of the original "Fantasia". 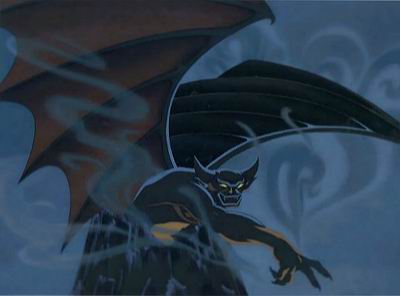 The inspirational connection here should be clear.

In 2001 my sister got her first motorcycle, a bright red 2000 Suzuki Katana that she has dubbed Tallulah. My wife and I broke Czernobog in properly with some friends on a weekend ride up to Monterey. My daughter Ari, who turned seven years old in January '04, has been riding behind me for several years already - something she seems to enjoy almost as much as I do. Ari's great-grandfather has been coming along on our annual "Dad Ride" (he turned 83 on the same day as our 2002 run up to Solvang) for years, and doesn't look ready to slow down yet. Some things, the best things, apparently never change. 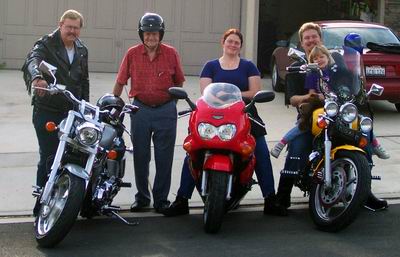 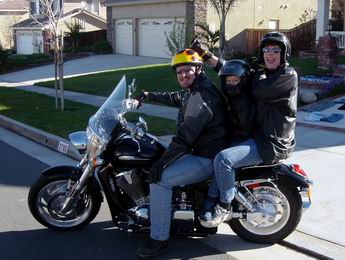 Thanks for everything, Dad.

Grandpa was 84 this year, and as ready to ride as ever - he's becoming a real celebrity perched on the back of a bike. As for Ari, this picture pretty clearly shows off *her* biker genes (and she's quite the celebrity herself these days when we ride into the school parking lot). 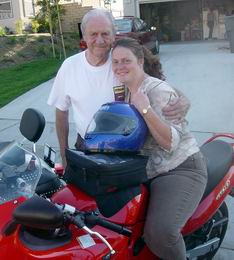 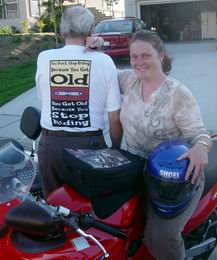 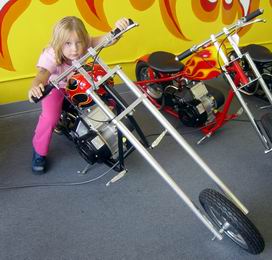 This year, we finally took the Dad Ride I've talked about for years - not just a day run, but a leisurely weekend cruise up through Monterey/Big Sur and Santa Cruz. Ari came along this year (and for the entire run, nearly 1,000 miles, was the best eight-year old passenger anyone could ask for), as well as (her) Great-Grandpa, who will turn 86 next month. Life - it just keeps getting better. 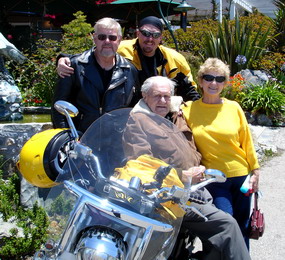 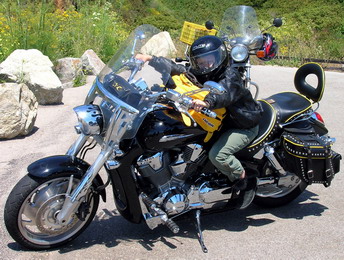 No Grand Tour weekend for the 2007 Dad Ride, just a couple of days cruising along the SoCal coast and up into the local mountains. But it's still hard to tell whether Ari or her Great-Grandpa (if you're doing the math, he was 88 last year) is having more fun, regardless of the destination. 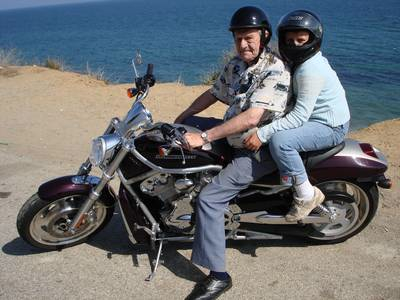 All of the chrome fetish stuff has been moved to its own page here, last updated 03.17.05

Back to The Belching Dragon